What was World War 2?

World War 2 was the largest military conflict in the history of mankind. It was fought between many nations who formed into two groups known as the Axis Powers and the Allied Powers.

Initially, both groups had very few nations but more and more nations joined in and so the war grew to encompass the whole of Europe and beyond. World War II was one of the deadliest events of human history. Read more about the Famous Leaders in World War II >> The Causes of WW2 What was the Luftwaffe? 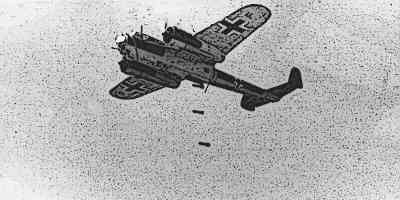 Learn about the History of the 'Luftwaffe Air force' During World War II Read more about the What was the Luftwaffe? >> How did World War 2 start?

World War 2 began as a result of Germany invading Poland on the first day of September, 1939. Other European powers such as France and United Kingdom feared that this would shake the balance of power in the continent.

So they declared war on Germany in order to stop its expansion. At around the same time, war broke out between China and Japan. The two wars would eventually merge and become collectively known as the World War 2. Who fought in World War 2?

The war was fought between two sets of nations – the Axis powers and the Allied powers. Axis powers mainly comprised of Germany, Italy and Japan. All three nations wanted to expand their spheres of influence and were quite powerful.

They were later joined by other allies including Bulgaria, Hungary and Romania. Other countries that favored the Axis powers included Iraq, Thailand and Finland.

The Allied powers initially comprised of United Kingdom, France and Poland. As the war progressed, other nations became involved in the war as well and joined the Allied cause.

These included United States, Soviet Union, China, Greece, Canada, Australia and several others. US, UK, China and Soviet Union emerged as the main Allied powers – together, they were termed as ‘The Big Four’.

Why did America participate in World War 2?

When World War II started in 1939, United States initially decided to stay neutral. Americans thought that the war was a fight between European powers, so U.S. had no reason to intervene.

What was America’s role in World War 2?

United States contributed a huge number of soldiers and other resources to the Allied cause during World War 2. More than 16 million American forces fought in the war.

American troops had to fight on two major fronts – the European theater and the Pacific theater. At the European theater, they fought alongside the Allied powers which were losing to the Axis powers. American help played an important role in turning the tide and forcing German forces to retreat.

In the Pacific theater, United States launched an offensive to take back several territories which Japan had taken over. It also sought to defeat and punish Japan for its unprovoked attack on the United States.

United States almost single-highhandedly countered and defeated the Japanese forces in the Pacific region. By the end of the war, US troops had overrun Japan and Japan was forced to surrender after twin atom bombs were dropped on two Japanese cities ‘Hiroshima and Nagasaki’.

When World War 1 ended, the entire region of Europe was in ruins. Its economy had collapsed, millions had died and all European nations were in a very bad shape. Germany lost the war, so it was forced to accept harsh treaties.

This created resentment in Germany. At the same time, the Empire of Japan began to grow and wanted to expand to new lands, specifically in the Pacific. Italy had a fascist regime which had similar expansionist ambitions.

Another contributing factor was the economic depression. The Great Depression hit the whole world after World War 1. This created economic instability allowing dictators and fascist to rise in many governments around the world.

When Germany began to expand under Hitler and started taking over neighboring countries, Britain initially adopted a policy of appeasement. This meant accepting Hitler’s demands so that he may agree not to wage war.

But Hitler only grew bolder with this and when Britain, France and other powers saw this, they were forced to wage war. These were the main factors that led to World War II.

These individuals led their respective nations and played a critical role during the war.

The Allied Powers won the war. From 1939 to 1941, the Axis powers had invaded a lot of land area and gained significant success. Germany already had the control of France. But with the U.S. entry into the war, the tide began to turn.

By 1942, Japan was on the back-foot in the Pacific region. Similarly, Germany was being defeated in Europe and had to retreat. By 1943, Germany suffered many major defeats.

World War II was the deadliest military conflict in human history. It involved nearly the whole of Europe, United States, as well as a large portion of Asia as well. Allied powers lost nearly 16 million soldiers in the war.

These also became permanent members of the newly-established United Nations. World War II also led to a decrease in the international reach of global powers and helped end colonization in Asia and Pacific.

Learn More about WW2 at Wikipedia