The first American flag was created during the American Revolutionary War. Since then, the American flag has undergone a lot of changes. Over the 19th and 20th centuries, these changes reflected the addition of new states. Read more about the Betsy Ross >> Read more about the Dixie Flag >> 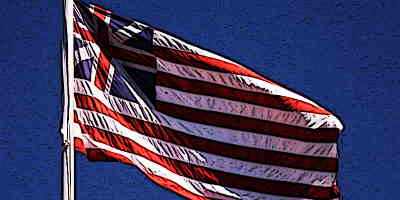 During the course of its history, United States has seen a number of very important flags Read more about the Top 10 American Flags List >> The US Flag code is a set of guidelines, laws and etiquette norms Read more about the US Flag Code >> Why the American Flag has 13 Stripes and 50 Stars


History of the American Flag

The American Revolutionary War broke out in 1775. This war was fought between the American colonies and the British forces. During the war, American states elected a parliament of their own which was called the Continental Congress. Changes to the Flag

The Congress resolution didn’t provide all the details regarding the design of the flag. So many different versions of the flag came into being. Also, as the years passed, many changes had to be made to the flag. For instance, as the number of states increased, the flag design was modified to include more stars representing the states.

The first major official change to the flag took place in January, 1794 when the total number of stars and stripes was increased to 15.

The role of Betsy Ross

According to the popular history of the American flag, Betsy Ross is famously regarded as the person who sewed the first American flag. Although this has been believed for many centuries, no one is sure if it is a fact or a legend.

One popular name of American flag was the Star Spangled Banner. This name became popular in the War of 1812 when a star-spangled flag, representing USA, was flown over Fort McHenry during the Battle of Baltimore. Inspired by this flag, Francis Scott Key wrote a poem about it. This poem was later adopted as the National Anthem of USA.

We hope you enjoyed this article if you would like to learn more about this flag please click on any of the links below or follow the external links for books and detailed Wikipedia articles on the subject.

Learn More about the History of the American Flag at Wikipedia