Bonnie Blue Flag was a banner used by the Confederate States of America. The flag had a dark blue banner with a white or golden star in the middle. The star in all variations of the flag is a five-pointed star. The flag was an unofficial symbol of the Confederacy during the American Civil War. Although the flag was popularized during the Civil War, its actual origins date much further back. 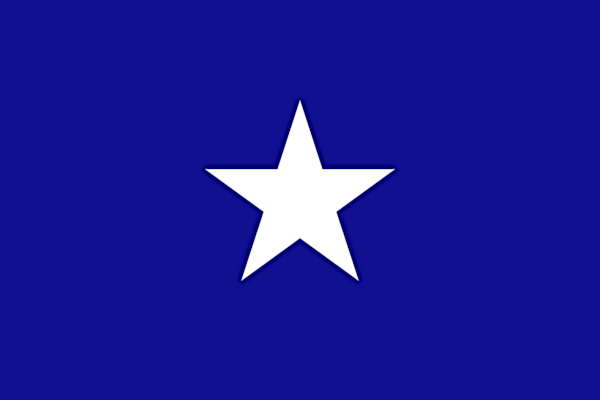 Origins of the Bonnie Blue Flag

The first use of a plain banner with a single star dates back to 1810 when the Republic of West Florida used it. West Florida was under Spanish rule at the time although it had a majority population of English-speaking people. The English residents of the province rebelled against Spanish rule. A troop of dragoons marched upon the provincial capital, captured the fort of Baton Rouge, and imprisoned the governor. The Bonnie Blue flag was carried in front of the dragoons on their march and was later raised upon the fort as a symbol of the new Republic of West Florida.

The symbol served as an inspiration for the newly born Republic of Texas. The Republic adopted the flag in 1836 with a minor modification that instead of the original white star, the Texan banner comprised of a blue background with a golden star. The flag remained an important symbol of Texan independence during its early years, especially until its entry into the Union in 1846.

Use during the Civil War

During the American Civil War, the state of Mississippi left the Union in 1861. After removing the original stars-and-stripes flag of the United States, a Bonnie blue flag in its place was installed at the state capitol. The flag became popular among Confederate forces during the early phase of the war. In fact, the Bonnie blue flag was flying above Confederate batteries as they made their first assault on Union forces at Fort Sumter.

The Bonnie Blue flag was popularized during the Civil War when Harry McCarthy created a marching song with many mentions of the flag. The song was written and performed in 1861, becoming a sensation right away. It then became a rallying cry of the South and remained immensely popular. The song was a favorite among Confederate soldiers and Harry McCarthy was frequently asked to perform it all over the South throughout the American Civil War.

The symbolism of the Bonnie Blue Flag

The Bonnie Blue flag symbolizes the independence and defiance of the South. During the Civil War, it came to symbolize secession and self-governance. As frequently used to oppose the tyranny of foreign rule, the flag was a symbol of the South’s opposition to the policies implemented by the federal government in opposition to the states. For this reason, the flag also came to be associated with state sovereignty. Today, the Bonnie Blue flag continues to be used as a popular symbol of the Southeastern United States. The marching song of the same name remains one of the most iconic American tunes of all time.