The Battle of Valley Forge

What was the Battle of Valley Forge?

In 1775, American Revolutionary war began. American forces started fighting the British army in order to gain independence for the 13 British colonies. In 1777, this war was still going on.

Why did they camp at Valley Forge?

The American Continental Army needed to stay at one place and continue the war once the winter was over. Valley Forge was a place 25 miles northwest of Pennsylvania. It had a lot of high places nearby so that if the British launched a surprise attack, the American army could go to high places and fight back.

What happened at Valley Forge?

A lot of training. When the American Army reached Valley Forge in 1777, they weren’t well-trained or well organized. So if they went on to fight the British this way, they would have lost.

Luckily for them, George Washington as their commander-in-chief had other plans. He planned to use the whole winter to train the army. So throughout the winters, American soldiers drilled and trained daily. This made them stronger, harder and better skilled to fight in a proper battle. It was thanks to this training that when the American army went back into the field in 1778, it was very well organized and was able to fight against the British very effectively. 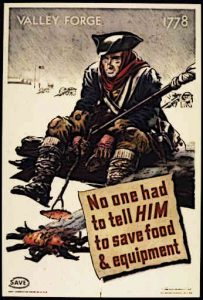 Who trained the American Army?

Benjamin Franklin recommended General Friedrich Von Steuben as the trainer. He was a military leader who was Prussian and had served in the army under George Washington. He had a lot of experience in training an army and he used this experience to train the American Continental Army. Despite the cold weather and harsh conditions at Valley Forge, General Steuben made the American soldiers drill every day and practice their weapons.

Did the training help?

Until 1777, the American Continental Army was more like a militia than an army. In a militia, the soldiers aren’t trained well and do not have a lot of trained officers to lead them on the battlefield. But at the Valley Forge, this large militia was turned into a proper army.

10,000 American soldiers trained at Valley Forge in the winter of 1777 and early 1778. The weather was intensely cold and the soldiers had to face hunger, diseases and other problems. Nearly 2500 died due to these problems. But the remaining soldiers became a very effective army which was then able to fight against the British.