Trench Warfare in World War I

Trench Warfare is a type of land warfare in which military trenches are dug along occupying lines to keep the troops well-protected and safe from enemy fire. The most famous use of trenches in the war took place during World War I and World War II.

Both sides dug deep trenches underground with elaborate dugout systems, protecting their trenches from any physical attack with barbed wire. The trench warfare largely contributed to stalemates across many fronts during World War II. 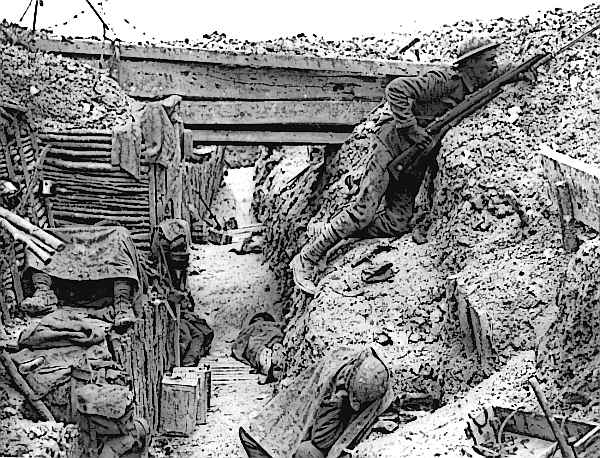 Trenches were dug by the soldiers themselves. There were two ways to do this. The trenches could either be dug straight into the ground using a method called ‘entrenching’. While it was a fast method, it also left the soldiers doing the digging open to enemy fire from the opposite side.

Alternatively, they could be dug by simply extending a trench on one end. This method was known as ‘snapping’. The third and best way (due to secrecy) was to make a tunnel and then remove the roof. Tunneling was the best way but it was also the most difficult to undertake.

The area between the opposing trenches of the two sides was called ‘No Man’s Land’. This area was usually between 50 to 250 yards apart. In this interim area, heavy gunfire was used to prevent the enemy from crossing it. It was the unoccupied piece of land between the two armies, which neither party wanted to cross or seize due to fear of the oncoming onslaught. Land-mines, barbed wire, stakes and other fortifications were also used to cover the No Man’s Land.

Construction of the Trenches

Life inside the Trenches

Soldiers would take turns and rotate through three separate stages inside the trenches: they would either be at the front line, in the support trenches or taking a rest for a few precious minutes. Whether it was repairing the trenches, guard duty, moving supplies, undergoing inspections or simply cleaning their weapons, they always had some task or the other to perform. A typical soldier manning the trenches would be armed with a rifle, a bayonet, and a hand grenade.

Conditions in the Trenches

The conditions inside the trenches were nothing short of repulsive. They depended very heavily on the weather, as rain caused the trenches to flood or become extremely muddy. This would result in the weapons becoming clogged and the soldiers would find it hard to move and find cover.

Pests ran amok inside the trenches, including rats, lice, and frogs. The rats would get into everything and eat up all the soldiers’ food and ration supplies. They would sometimes also nibble on the tired, sleeping soldiers themselves!

The constant moisture as an aftermath of any rain caused an infection known as ‘Trench Foot.’ If untreated, it could result in the soldier’s limb being amputated.